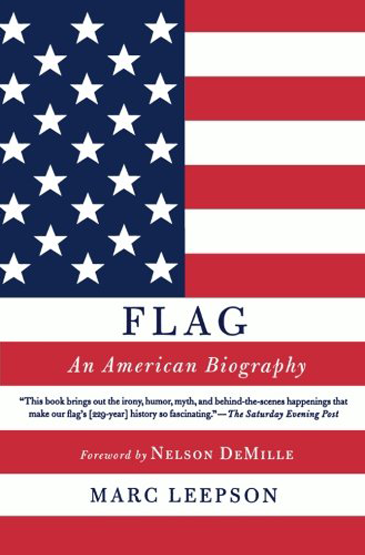 The nation turns to it as an emotional, political, and patriotic symbol in good times and bad. Americans fly it everywhere we live and everywhere we go, from front porches in Florida to pickup trucks in Alaska. We display the red-white-and-blue American flag at festive events to celebrate and, at times of national tragedy, to grieve and show our resolve. We wrap ourselves in it in displays of patriotism, politics, nationalism, and jingoism.

The thirteen-stripe, fifty-star flag is as familiar an American icon as any that has existed in the nation’s history. It stirs something in the hearts of Americans like no other symbol. Yet the history of the flag, especially its origins, is cloaked in myth and misinformation.

Flag: An American Biography rectifies that situation by presenting a lively, comprehensive, illuminating look at the history of the American flag from its beginnings to today.

Journalist, historian, and author of the highly acclaimed Saving Monticello, Leepson uncovers scores of little-known, fascinating facts as he traces the evolution of the American flag from the Colonial period to its prominent role as a symbol of American resolve in today’s war against terrorism.

Flag sifts through the historical evidence to—among many other things—uncover the truth behind the Betsy Ross myth and to discover the true designer of the stars and stripes. The book also shines informing light on a string of colorful and influential Americans who shaped the history of the American flag.

Leepson analyzes the influence and impact of the maker of the star-spangled banner, Mary Pickersgill; the author of the national anthem, Francis Scott Key; the coiner of the phrase "Old Glory," U.S. Navy Capt. Samuel Driver; the first officer killed in the Civil War, Union Col. Elmer Ellsworth, who died defending the flag; the first African-American Medal of Honor recipient, William Carney, who carried the flag and led troops through a viciously bloody Civil War battle; the creator of Flag Day, Wisconsin schoolteacher B. J. Cigrand; the father of the pledge of allegiance, Francis Bellamy; and Joe Rosenthal, the AP photographer who took the most reproduced image of the twentieth century, the marines raising the American flag at Iwo Jima.

The American flag was seen as a symbol of a "divine plan" for the American ideal during the Civil War; as a symbol of the nation’s historical heritage at the 1876 centennial celebrations; as a symbol conveying respect for the government and our social institutions—the so-called "cult of the flag"—in the late nineteenth and early twentieth century. During the Vietnam War, the flag was a divisive emblem in a bitterly divided nation. In the wake of the events of September 11, 2001, the flag became an instant and widely used symbol of a nation united against terrorism.

"Flag," as the novelist Nelson DeMille says in his preface, "is not a book with an agenda or a subjective point of view. It is an objective history of the American flag, well researched, well presented, easy to read and understand, and very informative and entertaining."