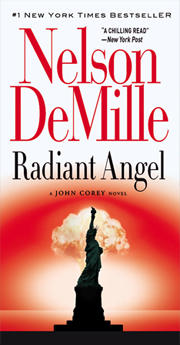 I was very touched by the hundreds of emails I’ve received from my Newsletter readers in the last six or seven months asking if I was still alive. Yes, I am, but I haven’t sent out a Newsletter since January. Why? Because I’ve been working hard on my new novel, and I don’t multitask very well. But I’m taking a brief break from my writing so I can get this Newsletter out to everyone to announce that I have a newly-redesigned website which is launching…Ta-da! Today!

We’ve worked hard on this new website and I think it’s terrific – easy on the eyes, and easy on the brain. The website was designed by a few 25-year-olds, so I know it’s hip, smart, trendy and sexy. Please check it out now. Or after you’ve read the rest of this Newsletter, and let me know what you think.

And to launch the redesign of my site, we’re having a contest! No skills necessary. One random winner will be picked from anyone who is signed up for my Newsletter . What is the prize? A complete DeMille collection in trade paperback – 19 books! (worth about $350). Plus 2 bonus items! All autographed, making them invaluable. So please share this Newsletter with as many family and friends as you can. Good luck!

And now a commercial message: On Tuesday, September 27, the mass market paperback edition of my most recent novel, Radiant Angel , will be released, and you can pre-order it now. Radiant Angel is still available in hardcover, trade paperback, audio and eBook. So if you’re a good multitasker, you can listen to the audio while you read one of the print editions, then switch to the eBook when you go to bed. I do this all the time. The important thing for you is to buy Radiant Angel in some format so I can pay my website designers. Thank you.

I’ve explained in past Newsletters that Radiant Angel is titled A Quiet End for the British edition. A number of readers have inadvertently bought both editions through online retailers, or picked up a copy of A Quiet End in the U.K. or in a Commonwealth country, thinking it was a new DeMille book, only to discover it was Radiant Angel . Well, sorry if that happened to you, and hopefully you can get a refund. There was no trickery intended here; foreign publishers sometimes re-title an American book for cultural or marketing reasons, which is out of my control. I, myself, preferred A Quiet End , which was my original title, but my American publisher… Well, it’s a long story.

I want to take this opportunity to suggest an excellent non-fiction book for you to read. The title is American Crime Fiction (published by Palgrave Macmillan) and the subtitle is A Cultural History of Nobrow Literature as Art . The author is Peter Swirski, a very respected professor of literature at the University of Alberta, Canada. Here’s what the flap copy says: “Peter Swirski looks at American crime fiction as an artform that expresses and reflects the social and aesthetic values of its authors and readers. As such he documents the manifold ways in which such authorship and readership are a matter of informed literary choice and not of cultural brainwashing or declining literary standards. Asking, in effect, a series of questions about the nature of genre fiction as art, successive chapters look at American crime writers whose careers throw light on the hazards and rewards of nobrow traffic between popular forms and highbrow aesthetics: Dashiell Hammett, John Grisham, William Faulkner, Ernest Hemingway, Raymond Chandler, Ed McBain, Nelson DeMille, and F. Scott Fitzgerald.”

Well, I’m very happy to be in the company of such literary giants. Note, too, that except for me and Grisham, every other author mentioned is dead. Maybe this is how the greatly exaggerated rumor of my death got started.

Now on to movie news: In past Newsletters I’ve reported that SONY-TV was interested in Plum Island and the whole John Corey series. And now they have made me an offer I can’t refuse. When I get more details, I’ll share those with you.

On another film project, my son Alex, who is a screenwriter, has finished his feature film script based on my novel, Spencerville . I think it’s a great adaptation of the book, and my agent has sent the screenplay out to Hollywood producers for their consideration. Hopefully we will have a deal before the end of the year. Ben Affleck was originally interested in Spencerville years ago and we’re going to get the new screenplay to him if we can find him. If you know where Ben is, tell him we’re looking for him. His people can talk to my people.

And in conclusion, my new novel, which is set in Key West, Florida and Cuba, is tentatively scheduled to be published in Spring 2017. I’m introducing a new character named Daniel “Mac” MacCormick who is sort of a younger and slightly less crazy John Corey. Mac is an army vet who served in Afghanistan, was wounded, and is now a charter fishing boat owner in Key West. He’s approached by three Cuban Americans from Miami who want to charter his boat – but it’s not deep sea fishing that they’re interested in. I’ll put the first chapter of this book on my website, probably in January. Meanwhile, I need a title for this book – maybe A Quiet End . No. That could get confusing.

So that’s my catch-up Newsletter, and proof that I’m still alive. Thanks again for all your emails and snail mails which I do read and enjoy. Keep ‘em coming so I know you’re alive and well.

Hope you had a great summer. Now, please check out my newly-redesigned website .