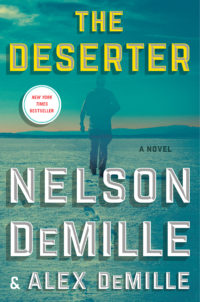 I hope everyone had a great Thanksgiving, filled with warmth and good cheer, and devoid of politics.

As I announced in my November Newsletter, The Deserter, co-authored with my son Alex, debuted at #3 on the New York Times combined print and e-book Best Sellers list. This was a tough list to crack, filled with new books by mega-selling authors, so this was something to be thankful for. The Deserter continues to sell well and reviews have been terrific. If you haven’t picked up a copy at your bookstore or haven’t ordered a copy online or downloaded the e-book or audiobook, this is the time to do it. And you can do that right here and now. The audio download has an added bonus – an interview with me and Alex done by Scott Brick, the audiobook narrator. If you listen closely, you can hear someone saying, “Are we getting paid for this?”

Alex and I have completed our book tour, which was fun but exhausting. We met lots of enthusiastic fans and signed hundreds of books. This was my 21st book tour and Alex’s first. We enjoyed doing this together and we look forward to doing it again for our next co-authored book. Someday I will write a book about my book tours. I will title it, The Agony and the Ecstasy.

Also, let me remind everyone that all twenty of my earlier books are in paperback and they would make great stocking stuffers. Check them out here.

I’d like to recommend a book that I’ve just read: Takes One to Know One, by my good pal Susan Isaacs. Susan, who wrote Compromising Positions and thirteen other great novels, is at the top of her game here with this smart, wicked and witty novel. The New York Journal of Books says, “Isaacs’s writing is clever and funny, with laugh-out-loud moments and strong character development.  …Highly recommended for anyone who likes fast-paced storytelling, quirky and interesting characters, and a plot that keeps you guessing right along with the protagonist.”

Takes One to Know One will make a great Christmas or Hanukah gift. The nice thing about a book as a gift is that you can read it, then wrap it. Don’t spill anything on it.

Also for holiday gift giving, you can get a signed copy of The Deserter by ordering it online from my good friend Otto Penzler, who is the owner of Mysterious Bookshop in Manhattan and publisher of Mysterious Press. Alex and I were in Otto’s bookstore recently and signed about a hundred copies of The Deserter. You can get one by clicking here. Act now; he’s almost sold out.

Also as announced in my November Newsletter, a major studio and major producer/director have made me an offer I can’t refuse for the movie rights to The Cuban Affair. I thought I’d be able to reveal the details at this time, but I’ve been asked to wait until the deal is announced in a studio press release, probably in January.

Meanwhile, if you’ve read The Cuban Affair and if you have a suggestion about who should play Mac MacCormick and Sara Ortega, let me know. I already know who should play the cantankerous Viet Nam veteran. Me. Maybe this is what’s holding up the deal.

A lot of readers of this Newsletter have asked me what I’m working on. I’ve answered this in past Newsletters, but let me answer again: My work in progress, titled The Maze, is another John Corey book, the eighth in the series, and the book opens where the first John Corey book, Plum Island, began: on the back porch of his uncle’s house overlooking the water on the North Fork of Long Island. John is in early and forced retirement and exploring his options, when someone from his past steps onto the porch and makes him an offer he should refuse. John Corey does not make good choices, but he makes for a good story.

As for Alex, he’s begun the second book in the new series featuring Scott Brodie and Maggie Taylor, Army CID agents who debuted in The Deserter. This book is tentatively titled No Man’s Land, and it takes place in Berlin, a city with a dark history and darker secrets. Alex and I are in a writing race to see who finishes first and gets published first. I hope we don’t get the chapters mixed up.

Christmas is coming, and whether or not this is your holiday, it is the season where we reflect on the past and remember loved ones who are no longer with us. We should also remember the men and women who serve in uniform.

I wish you all a Merry Christmas, a Happy Hanukah, and a New Year of peace, happiness, and good health.