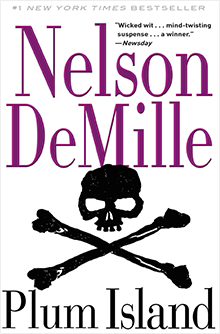 I hope everyone had a great Thanksgiving.

I’m not a big fan of fowl, so my wife bought me a beef Wellington for Thanksgiving. We had about twenty people for dinner and four of them were from Denmark, though I’m not sure how they got there. They sort of understood the holiday, including my explanation of why the head of the household ate beef Wellington while everyone else ate turkey. I can’t remember what I said, but the Danes thought it was a wonderful tradition. Me too. Next year, rib eye.

In my last Newsletter I announced that the John Corey series had been optioned by Sony-TV, and that ABC-TV would air the pilot episode. I also asked my Newsletter readers to suggest an actor to play the role of John Corey. Holy mackerel! I got hundreds of suggestions and they were all over the board, including Robert Taylor and Brad Dexter, who are not available because they’re dead.

Alec Baldwin and Bruce Willis have both told me that they like the Corey character, and Aaron Eckhart once expressed an interest. This is not my decision to make, but if it was, I’d go with a guy who created the character – someone who knows what makes John Corey tick. Right?

But seriously. Baldwin, Eckhart and Willis are my three top choices, and I thank you all for your good suggestions which I’ve passed on to those involved with the production. Hopefully, by January or February, the right John Corey will be found, and I’ll announce the name here.

Meanwhile, I’d like to ask you all for your suggestions about who should play the female lead. I’m not sure how the Corey series will develop in regard to John Corey’s female partner, so I can’t say that she will be Kate Mayfield, his FBI agent wife who appears in most of the Corey novels. But in general, who do you think would be a tough, but sexy and smart lady to stand up to John Corey and keep him focused and out of trouble? This is a more difficult task than picking Corey, and I’d be interested in your thoughts. Thanks.

In my last Newsletter, I said I’d list a few of my favorite books of 2016. Well, I realized if I did that, I’d probably forget some books written by friends and colleagues, and they’d hold a grudge against me for the rest of their lives. Not that authors are petty, narcissistic, egotistical, thin-skinned, and insecure, but if they were, they’d flip out if I didn’t mention their wonderful books. So to avoid any unpleasantness from my author friends, I’ll just say that I love everything any of them wrote in 2016. Great stuff. Can’t wait for your next.

As for my own books, it’s totally your choice if you want to buy them as holiday gifts. They’re great books, but I would understand if you’d rather give someone, say, a fruitcake instead of a DeMille novel. Fruitcakes are good, and healthy – if you don’t eat them. And who does? It’s the thought that counts anyway. If you give a fruitcake to someone, they know what you think of them. A DeMille novel might send a message to the recipient that you think they’re intelligent. And you don’t always want to do that. Right? Your choice.

Anyway, if you do give one of my novels as a gift, I hereby give permission for you to autograph my name. You can copy my signature below. Who’s gonna know? Say something nice.

And finally, my best wishes to you for a merry and magical Christmas, a happy and healthy Hanukkah, and a New Year filled with joy, love, prosperity, and peace on Earth.

See you next year.