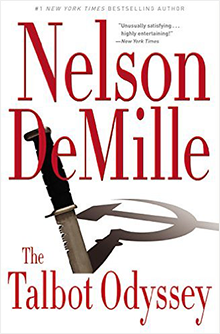 I hope everyone had a very Merry Christmas and a happy New Year celebration. We had a houseful of people for the holidays, many of whom looked familiar. A lot of people brought us the fruitcakes we gave them last year. They will see those fruitcakes again.

In my December Newsletter I printed the list of actors who you, my readers, suggested should play the role of John Corey in the upcoming ABC-TV series. One of the actors you suggested was Robert Taylor, who I said was not available because he was dead. Well, I got hundreds of emails informing me that there are two Robert Taylors – one dead, one alive. The living Robert Taylor, as most of you know, played in Longmire, and I checked him out online and he looks young and healthy and would make a great John Corey. The other Robert Taylor…well, I remember him as a very good actor, but no longer available.

I also said in my last Newsletter that my three top choices to play Corey were Alec Baldwin, Aaron Eckhart, and Bruce Willis, and I got dozens of emails from people saying they would never watch anything that Alec Baldwin was in. So I called Alec to tell him he was out of the running but I got his voice mail, which said, “I moved to Canada. Be back in four or eight years.” What was that all about?

Anyway, in my last Newsletter I asked my readers for suggestions about who should play the female lead opposite the John Corey character. Many readers said, correctly, that would depend on who played John Corey. Well, if I played John Corey I’d want Sandra Bullock to play Kate Mayfield. Or better yet, Sandra Dillingham – my wife. She is my leading lady of all time. But here are the names you came up with (alphabetically):

Wow! Quite a cast. The most chosen names were Angie Harmon, Sandra Bullock, Julianne Moore, and Stana Katic. Interesting. And thank you for your good suggestions. I’ll let them know.

And now for a commercial message. Here is a list of my 19 novels: By the Rivers of Babylon, Mayday, Cathedral, The Talbot Odyssey, Word of Honor, The Charm School, The Gold Coast, The General’s Daughter, Spencerville, Plum Island, The Lion’s Game, Up Country, Night Fall, Wild Fire, The Gate House, The Lion, The Panther, The Quest, and Radiant Angel.

They are all available in print, audio, and eBooks. If you buy one (or more) in January, you will have a prosperous year. And so will I.

If you’ve been following the news about the Russians being kicked out of their Long Island mansion, you’ll want to read The Talbot Odyssey which exposes what the Russians are up to at their estate.

In my next Newsletter I’ll announce the publication date of my next novel. And maybe the title if I and my publisher can think of one. I’m considering calling it Book Twenty.

Let me take this opportunity to wish my readers a happy, healthy, peaceful, productive, and prosperous (see above) New Year. And my thanks to all of you for your support and your good letters and emails throughout the year.