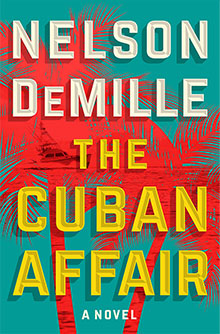 If you were anxiously awaiting my April Newsletter, the reason you didn’t get it was because I was putting the finishing touches on my new novel, titled The Cuban Affair. Ta-da!

I am now unemployed – or as we say in the business, I’m between books. The Cuban Affair will be published on September 19 by my new publisher, Simon & Schuster. Hope you like the bold new cover design! You can pre-order The Cuban Affair by checking out Amazon or Barnes & Noble, or your other favorite online retailer. Order now, before the holiday rush.

In July or August I’ll be posting the first two chapters on my website, so you can read them for free and decide if you agree with the professionals at S&S who loved The Cuban Affair and have made it their lead book for the fall season. They’ve also paid me for it, which is a good sign.

September 19 is a Tuesday, and as I’ve mentioned before, all hardcover books are published on a Tuesday. Why? Two reasons: First, the Bible was published on a Tuesday, so this is a tradition going back thousands of years. Actually, that’s B.S. The real reason is that all weekly sales for bestseller lists are compiled starting on Tuesday. It’s like a horse race; every book leaves the gate at the same time – 12:01 a.m. on Tuesday. At midnight on the following Monday, the weekly race is over and the sales are tallied to see who came in at #1, #2, #3, and so forth. This is exciting for publishers and agents and their authors who have a shot at making the bestsellers lists. No one else cares. But I know that you, my readers, care. So please pre-order The Cuban Affair– all pre-orders are counted in the first week’s sales. I’m shooting for #1, but the competition for the fall season is fierce this year. A lot of my competing authors bully or shame their friends and family into buying their new book. I don’t do that. I rely on you, my loyal readers, to make me #1. You might ask, “Wouldn’t you settle for #2?” No. Because as I learned from my track coach in high school, “Number two is just the first loser.” Let’s go for the gold.

Speaking of bestsellers, my good friend Doug Brunt, a New York Times bestselling author, who wrote Ghosts of Manhattan and The Means, has a new one coming out on May 30 – a Tuesday – titled Trophy Son. I’ve read it and loved it and so will you. Doug is a masterful storyteller, and Trophy Son received early praise from my pal Harlan Coben, who said, “Trophy Son brings Conroy’s The Great Santini and Malamud’s The Natural into the present day.” I agree. And I’ll be in conversation with Doug at the Book Revue in Huntington, Long Island, NY, on Saturday night, June 3. Check my website or Doug’s, or the Book Revue for details. Looking forward to seeing you there.

An update on the John Corey TV series. My long-time friend, Mace Neufeld, who produced the feature film version of The General’s Daughter and who is involved with the Corey series, tells me that ABC-TV loved the script for the pilot, and plans to shoot the pilot episode this summer. No one has been cast for the John Corey role or for Kate Mayfield’s role, but ABC is talking to several agents who represent some of the actors whose names I’ve submitted from the suggestions that you’ve been kind enough to send me. (See my December 2016 & January 2017 archived Newsletters for those names.) Hopefully, this pilot will be ready in time for the fall lineup. Stay tuned for more.

Moving right along, I’ll be attending BookExpo at the Javits Center in New York City on Friday, June 2 to sign Advance Reading Copies of The Cuban Affair. Maybe a talk or two to booksellers and a visit to the Simon & Schuster booth. So if you’re a bookseller attending BookExpo, please stop by and say hello. I look forward to seeing you.

Also, I’ll be doing a national publicity tour for The Cuban Affair in September and October, so please check back often to my website events page for the latest evolving schedule. This tour is a work-in-progress, subject to me not being pulled off my flights, so keep an eye out for updates.

And here’s another book I’d like to recommend for summer reading: Back to Brooklyn by Lawrence Kelter. Why do I recommend this book? Because it is the literary sequel to one of my favorite movies, “My Cousin Vinny.” Yes, Vincent Gambini is back. And so is his sidekick, Lisa. If you loved the movie and miss these characters, read Back to Brooklyn, and find out what Vinny and Lisa have been up to. A great and fun read.

If you’re still looking for summer reading, try Rampage, by my good pal Justin Scott. You may remember this book as a huge bestseller thirty years ago and this is a Special Anniversary Edition of this classic crime thriller. When you read it, you’ll see that the more things change, the more they remain the same. And you’ll also see why the publisher has brought it back.

And here’s my last two summer reading picks. As I’ve previously mentioned, I’ve co-authored a short story for an anthology titled, MatchUp. My co-author is my good friend Lisa Scottoline who has a new bestseller out, titled One Perfect Lie, which I’ve read and loved, and I highly recommend it to my readers. Lisa Scottoline never disappoints and this one, which breaks new ground, is no exception. Check it out on Amazon or B&N, or get to your favorite bookstore and buy it before they’re sold out.

But back to MatchUp. This is a collection of eleven stories by twenty-two bestselling authors – eleven male, eleven female – who “match up” their famous fictional characters in a short story. My character is John Corey and Lisa’s is Bennie Rosato, and the results are hilarious. MatchUp will be published by Simon & Schuster on June 13 – a Tuesday – and is edited by my good pal Lee Child, who also has a co-authored story – with Kathy Reichs – in the anthology. This book was put together with a lot of hard work by another friend, bestselling author Steve Berry, who contributed a short story with Diana Gabaldon. I’ve had a chance to read all the stories, and they’re exceptionally good and original. “Publishers Weekly” and “Kirkus Review” both gave MatchUp a starred review. Pre-order now on Amazon or B&N. In case you think these bestselling authors are making enough money already, you should know that all the proceeds from this anthology will go to the International Thriller Writers to support this fine organization, which promotes literacy and encourages struggling and up-and-coming writers. No animals were harmed in the writing of this book, but some trees were transformed into paper and will live forever as book pages.

Well, that’s it for May. Have a happy and safe Memorial Day, and please remember all the men and women in the armed forces who have given their lives for this great country, including the men of Delta Company with whom I served in Vietnam. And to their families, please know that I remember them with the traditional Memorial Day toast, “To those who are not with us today.”

See you in June.