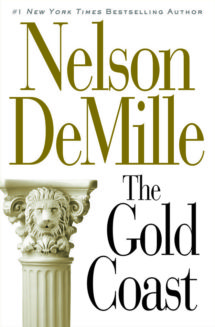 Hard to believe that summer is half over already – unless you’re reading this south of the equator where it’s winter. It’s worth a trip to Australia or New Zealand just to flush the toilet and watch the water go clockwise.

On another subject, if you tuned into CBS Sunday Morning with Lesley Stahl to see me, and you blinked, you may have missed me. The segment was really about my friend Linda Fairstein, and my five minutes of fame was edited down to about five seconds. That’s TV. But I did get a good dinner at Aretsky’s Patroon restaurant, and a free copy of Linda’s new book, Deadfall, which I’m loving.

On August 1 I posted the first chapter of The Cuban Affair on my website, and in September I’ll post Chapter Two. These chapters are supposed to entice you to pre-order The Cuban Affair from your favorite online retailer, or from your local bookstore. Posting free chapters is always a risk; the reader, who might have already decided to buy the book, may read the free chapters and decide the book sucks. But I’m gambling that you’ll be hooked by Chapter One and Two. Let me know.

For those of you who liked The Gold Coast, and those ten people who have never read it, it is being reissued on August 29 in two formats – mass market and trade paperback. There’s a new cover and a new price on the cover. Is the price lower than the last reissue? No. But it’s still a great deal for hours and hours of entertainment, and costs less than a martini in a New York City bar.

My publicity tour for The Cuban Affair is becoming finalized and you can see where I’ll be appearing by clicking here. Hope to see you at one of these events.

The Cuban Affair is making the rounds in Hollywood, and with luck we’ll have an offer from a studio or production company in the next few weeks. After you read the book, let me know who you think should play the lead parts of Dan (Mac) MacCormick, and Sara Ortega. Also, the supporting cast in this story is strong. I see me as Jack Colby and also me as Richard Neville. When you read the book, you’ll agree.

I’ve gotten hundreds of emails asking me what I’m working on now. Well, I’m working on my tan. And also an outline for my next book. More on that in September.

And don’t forget – The Cuban Affair will be released on September 19. You can pre-order now from your favorite online retailer. Hope you enjoy Chapter One.

And finally, have a great August and a happy and safe Labor Day weekend.

See you in September.